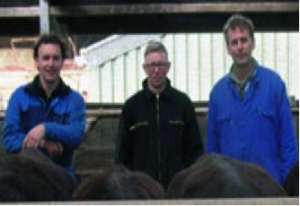 In 2000, I had the idea to start with Wagyu cattle. I got this idea after reading an article about the wonderful history of the breed. Interestingly, while they were bred to pull, they also produce high quality and healthy meat, which is part of a cholesterol-lowering diet. They are very pleasant, quiet cows that calve very easy. As a dairy farmer, I found it very attractive that I did not need to milk them, which saves a lot of work. Chris Boomsma was the first person who didn’t laugh at me when I told him about my plans for creating a Wagyu herd. Then we embarked on the adventure together and the search for embryos began. After a long time and many mistakes we both had two Wagyu cows and the breeding program began flushing them.

First we needed to find different bloodlines to prevent inbreeding. Later a Japanese man came to the Netherlands who advised us to apply rotational crosses between four bloodlines in the Wagyu. He suggested breeding them in the order of growth x marbling x growth x marbling. What I did not like was that these crosses were made on paper and were based on their descendants. I thought to myself, “As one of the largest Wagyu breeders in Europe, I feel the responsibility to not make the same mistake the Holstein breed has made by not looking at the animals before the mating is considered.” Within the Holstein breed there is an increased interest in cross-breeding to several different varieties. As I am also a dairy farmer, I was thinking for myself to also start with a cross-breeding program. My conclusion was that the demand for other varieties indicated that the Holstein breed has partially failed. My CRV advisor told me, “No, you are wrong because there is plenty of choice within the Holstein population to correct the problems.” I understand him, but then realized the mating system we use does not work. I said, “It is either one or the other.” Next I called Jan Schilder, Weeks® Approved Analyser in my area, and asked him if he could help us with the Wagyu breeding. I did this somewhat questioningly, because I thought he was only analysing dairy cattle. But that was not the case! aAa® and Weeks® knowledge of many different breeds is great. As he analysed most of our cows and heifers, he explained to us the differences in the animals is due the relationship of all the parts. The other thing we did was that we divided all the steers in the barn into two groups, by fine and coarse structure and thus meat marbling. In the coming years we will see how these predictions come true. We also confirmed the idea which direction we need to breed. We want to produce large animals that have enough weight, with refined bones and skin that produce enough milk for the calf and give a fine texture and marbling in the meat. I think we discovered aAa® just in time, because our cows were becoming more and more narrow.